Several companies have been raising long-term debt in this low interest rate environment for the purpose of repurchasing shares. The result of this “financial engineering” is that some companies have not actually helped boost the long-term value of the company.

Nike (NYSE: NKE), a component of the FFJ Portfolio, does not fall in this “bucket” of companies. It appeals to me because my wife and I are:

Results were disappointing but growth is never linear in any industry. Typically, companies will experience periods in which:

NKE’s leadership team has learned that during challenging periods wholesale changes are not necessary. Instead, what need to be done are the right things that matter most. It is by doing the right things that NKE expects to achieve high single-digit revenue growth and mid-teens EPS growth over the next 5 years.

NKE’s goals and objectives will be achieved by addressing evolving consumer demands. Fundamental change will be driven through NKE’s “Triple Double” initiative:

PRODUCT - double cadence and scale of innovation through performance and sports style;

SUPPLY – double speed from product insight to delivery to the consumer;

NKE has identified “digital” as an early sign of consumer-led disruption in its industry which is providing it with an opportunity to become more deeply connected to consumers. This has led to the development of the “Consumer Direct Offense” in which NKE has realigned itself.

NKE has established key operational measures of success of which the following 5 are the most critical:

NKE envisions digital comprising the vast majority of its business in the market. This will be achieved through growth in the broader application of new digital technologies such as artificial intelligence, voice command, augmented reality and image recognition.

NKE’s North American business generates ~ $15B in revenue and growth is expected to be in the mid single digit range over the next 5 years; NKE’s projected NA growth rate takes into account the risk of further retail disruption than that experienced to date.

Over 60% of its business in this region is generated through conventional distribution channels but NKE expects this to contract over the next 5 years. Digital and physical channels, owned and partnered, will expand to over 80% of its business.

Low to mid-teens revenue growth is forecast given that sport participation and the culture of sport are expanding.

NKE has indicated that distribution in China has leapfrogged many of the stages of physical and digital retail development in NA. As a result, it is very bullish about its growth opportunities in this region.

Mid to high single digit revenue growth over the next 5 years is projected with NKE currently being the #1 favorite brand in all 5 key cities (London, Paris, Berlin, Barcelona, and Milan) across this region.

Aggressive roll-out of Nike.com and mobile apps is underway to serve the very strong demand for the NIKE brand. In addition, NKE is investing heavily in enhanced local digital capabilities.

High single digit to low double digit revenue growth is projected over the next 5 years with growth benefiting from an emerging middle class and the passion for sport (most notably football/soccer).

Three (Tokyo, Mexico City, and Seoul) of NKE’s 12 key cities will drive extraordinary growth. NKE is currently the #1 favorite brand with the over 85 million consumers in just these 3 cities!

Through NKE’s strategic relationship with Flex, for example, game-changing innovations are being brought to market and are being scaled faster than ever before.

Together with Flex, NKE is now producing footwear using “NIKE Flyleather”. This new recycled leather has at least 50% leather fiber made on a roll versus leather coming from a hide. It is 40% lighter and 5 times more abrasion-resistant than traditional full grain leather manufacturing. Because “NIKE Flyleather” is produced as a traditional rolled good instead of an imperfect hide, NKE is now able to produce shoes much faster and with greater flexibility and is benefiting from a reduction in material costs.

Flex will deliver over 3 million pairs of shoes to NA in FY2018. Together with Flex, NKE plans to produce tens of millions of pairs of shoes by 2023 with more than 25% of this volume delivered through NIKE Direct on a short lead time responsive model.

This strategic relationship with Flex is enabling NKE to reduce its standard manufacturing to market timeframe from ~60 days to 10 days or less.

Investment for Growth and Profitability

Selling, General, and Administration expenses are expected to expand in areas that will differentiate NKE as the long-term leader.

NKE expects to reinvest about 3% to 4% of its revenue in capital expenditures over the next 5 years with heavy focus on product innovation, product creation, brand marketing, and the digital technologies and talent required to enable more personal service on a large scale level.

Although NKE will invest in building in-house capabilities it will also be increasing its investment in the acquisition of capabilities, or co-investing with partners, to accelerate its strategies. NKE will also continue to pursue opportunities to invest through acquisition or to partner in areas such as data science and analytics, machine learning, augmented reality, artificial intelligence, and digital product creation.

These repurchases have contributed in part to NKE’s long-term debt slightly more than doubling in 5 years. Unlike other companies, however, which have taken on significant long-term debt on their balance sheet for the purpose of repurchasing shares, NKE has an extremely strong balance sheet. As at August 31, 2017, Total Current Assets (~$16B) exceeded TOTAL Liabilities (~$11.65B). 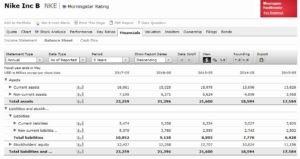 The following schedule of Long-Term Debt is not nearly as daunting as other schedules I have reviewed. 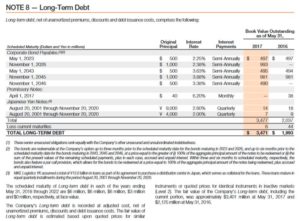 I recognize the capital structure of a company is heavily dependent on multiple factors, and therefore, the use of leverage may be totally appropriate in one industry but not another. Lately, however, some companies have been taking advantage of the low interest rate environment to raise a significant amount of leverage for the purpose of repurchasing outstanding shares.

This has, in some cases, resulted in share price and EPS increases well beyond historical norm. While this might be an entirely appropriate strategy for some companies I question what will happen to the rate of growth in these two metrics once a company reaches the stage where it no longer makes sense, or it is no longer possible, to raise debt to retire outstanding shares.

As investors we may have a different tolerance for risk and different goals and objectives. As a result, some investors may be entirely in favor of the use of leverage to retire shares. My investor profile, however, is as laid out in the Introduction of this article.

One reason NKE appeals to me is because of its conservative use of debt. With a fairly clean balance sheet (note how Goodwill and Identifiable Intangible Assets are also negligible!) NKE has the flexibility to do what it needs to do to grow its business in an environment where consumer tastes and purchase habits are subject to radical change.

While NKE has rewarded investors with double digit percentage dividend increases for the past several years, it did hold its dividend constant in FY1999 – 2002.

The dividend payout ratio target range is currently 25-35%; this range was communicated October 2015.

$2.32 is the current mean projected adjusted EPS from 36 brokers. This translates into a ~25.5 PE based on the current $59.19 November 17, 2017 closing stock price. This is relatively consistent with recent historical levels. 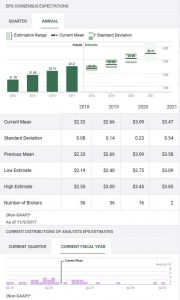 I view NKE’s recent headwinds as temporary. I am confident management knows what needs to be done and how to execute its plan to adapt to the rapidly changing retail environment. The changes presented during NKE’s recent Investor Day presentation suggest to me that NKE will be a stronger company 5 years from today.

My intent is to retain our NKE shares in the FFJ Portfolio, reinvest all dividends, and to make periodic additional purchases as funds permit.