In 2015, NerdWallet analyzed data from several sources, including the New York Federal Reserve and the U.S. Census Bureau. It subsequently commissioned an online survey, conducted by Harris Poll, of more than 2,000 adults to determine why Americans have so much debt.

The intended outcome of this study and the analysis of the results were to provide tips for consumers on how to: 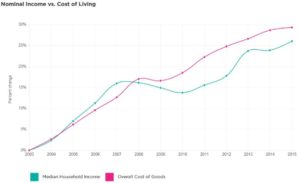 US Nominal Income vs Cost of Living

NerdWallet dug into the “why” and the psychology behind debt. It found multiple factors that contribute toward the increasing debt levels. 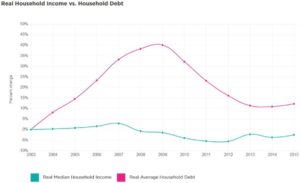 On December 7, 2016, Equifax Canada released its Q3 2016 National Consumer Credit Trends Report indicating the national 90 day+ delinquency rate and average debt held by Canadians increased in the 3rd quarter of 2016 relative to the same period in 2015.

Average debt increased by 3.6% to $22,081, while the delinquency rate increased from 1.05% to 1.14 %. This increase was largely driven by oil-producing provinces in Western Canada and Newfoundland.

Overall, there was no change in delinquency rates since Q2 2016.The highest delinquency rate increases were found in Alberta, Saskatchewan, and Newfoundland, which is not surprising given the dramatic downturn in the oil and gas sector.

A positive finding in this report it is that residents in Western Canada and Newfoundland, two provinces hit hard by the oil bust, are not piling on more debt. Secondly, Ontario and Quebec showed stability and consumers were displaying responsible repayment behaviour. On average, Canadians across the country were found to be managing their debt wisely, with the majority paying off their credit cards in full every month and few making only the minimum payments.

Equifax Canada also noted that the auto and installment loan sectors are showing significant increases in outstanding balances of 7.8% and 7.7% year-over-year. Our low interest rate environment is very likely a huge contributing factor to consumers’ willingness to take on additional debt to this magnitude.

What is especially disconcerting to me about the huge increase in the auto and instalment loan sectors is that this is the type of debt incurred to generally acquire assets that depreciate in value.

I also find it alarming that Equifax indicates the majority of consumers are actually decreasing their debt, but those who are still increasing their debt load are adding larger amounts on average and by sufficient amounts to increase the total levels.

What to Do if You Are Part of These Unfortunate Statistics

If you have children, it certainly might be tempting to quickly address a debt problem by telling tell them to move out and to become self-sufficient (especially if they are teenagers). I don’t recommend this, however, since your teenagers are likely payback for all the things you did/did not do when you were a teenager!

Earning more income is a great idea but be careful. If you are going to earn more income you MUST change your spending habits because, generally, when income increases people start buying more thus increasing their debt load and debt service obligations. It gets worse as you move up the income scale since it becomes easier to obtain credit relative to people in lower income brackets.

To truly tackle your debt you must, first and foremost, ascertain just exactly how much debt you have, the interest rate and how much you are paying in interest annually to each creditor. Your chances of eliminating your debt diminishes dramatically if you do not know your starting point.

Analyze your spending habits and patterns. In the Tools section of this site you will find a CDN and a USD cash flow Excel file which will help you in this regard. There are 3 worksheets in each file:

Once you have completed entering the data in these worksheets you will be able to determine what areas of your overall spend are totally out of whack or may just require some tweaking.

Vehicles are also the downfall of many. Many people own more car than they can afford and lease their vehicles. When the lease expires, they end up leasing a new vehicle. In essence, they have car lease payments that just seem to go on in perpetuity.

Do what you need to do to get out of debt and don’t procrastinate!

By Charles|December 8th, 2016|Budgeting and Debt|Comments Off on Low Interest Rates Have Fanned Debt to Insane Levels