Johnson & Johnson – Is It Now Fairly Valued After 15% Pullback?

The last time I wrote a Johnson & Johnson (NYSE: JNJ) related article was September 15, 2017. In that article I stated in ‘Final Thoughts’ that ‘JNJ is one of the companies investors should hold in their portfolio for the long-term if they are seeking safety, capital appreciation, and steadily increasing dividends.’

At the time of that article, JNJ was trading at ~$134. One look at JNJ’s stock chart and we see that JNJ shareholders have certainly been on a roller coaster ride.

On November 26th, JNJ’s stock price reached a high of $146.90. Subsequent to that date, JNJ’s share price started to pull back.

On December 14th when Reuters published its story that JNJ knew for decades that cancer-causing asbestos lurked in its Baby Powder, JNJ’s share price tumbled to the current $133; the decline in JNJ’s share price erased ~ US $47B from its market capitalization. Click here for Reuters' Lisa Girion’s interview with CNBC in which she discusses her JNJ story.

In response to this Reuters story, JNJ released a statement regarding the speculation about the safety of its products. JNJ has also devoted a section of its website in which it discusses the safety of talc powder.

Given the recent significant pullback in JNJ’s share price, I strongly suspect many investors are wondering whether this is an opportune time to acquire shares in one of only two AAA rated companies. S& P Global initiated a AAA rating in September 1987 and Moody’s initiated it in November 1994; both ratings have remained unchanged since then.

I have been a long-time JNJ shareholder, and therefore, I am taking a keen interest in any new developments regarding the talc legal issue even though it has been known for years that JNJ’s baby powder product contained talc.

Lawsuits Are Nothing New to JNJ

‘We believe our first responsibility is to the patients, doctors and nurses, to mothers and fathers and all others who use our products and services. In meeting their needs everything we do must be of high quality.’

When we look at JNJ’s 2017 10-K, the information set forth in Note 21 ‘Legal Proceedings’ of the Notes to Consolidated Financial Statements (pages 81 – 93 of a 117 page document) strongly suggests that adhering to the statement reflected above is extremely costly...as in ~$1.3B/year (see 'Why JNJ is a Litigation Magnet' article)!

A review of several previous 10-Ks reveals that extensive legal proceedings are a normal course of JNJ’s business. JNJ truly has extensive experience when it comes to defending itself!

In cases where the court finds in favor of the plaintiff, JNJ appeals the rulings. It would not surprise me if over several decades a substantial number of plaintiffs have ultimately agreed to a much smaller settlement than that awarded to them just so they could finally put the matter to rest and at least walk away with some settlement.

4 Stages of a Crisis

Following the incubation period (the initial stage of an infectious disease), we have the Prodromal stage where the symptoms may not be very specific or severe. JNJ, in this case, can still perform usual functions although distress or discomfort may be felt.

This is when a crisis becomes visible outside the organization. Once a company enters this stage management has little choice but to address the crisis. At this stage, it is too late to take preventative actions. Any action taken now is more appropriately associated with damage control.

This is typically the longest of the 4 stages and is when litigation occurs, media exposes are aired, internal investigations are launched, government oversight investigations commence and so on. This stage can last for years and in some cases this stage may never end.

This is the final stage of crisis management. Things begin to return to normal and effective resolutions to address the issue(s) are put into practice. Depending on how these resolutions are implemented and followed, it is possible that the crisis may fade from the spotlight.

In my opinion, JNJ’s talc crisis has been in the Chronic Stage for several years and the Reuters report does not really discover anything new that is of significance; there are already roughly 9,000 – 10,000 pending talc related cases and reference to these legal proceedings have been mentioned in multiple 10-Ks.

In July 2018, a Missouri jury ordered JNJ to pay a record $4.69B to 22 women who alleged the company’s talc-based products, including its baby powder, contain asbestos and caused them to develop ovarian cancer; JNJ is appealing the decision and has successfully overturned talc verdicts in the past.

Suppose, however, that things turn very ugly for JNJ wherein over the years juries award a cumulative ~$40B to plaintiffs and JNJ loses all its appeals.

One has to wonder to what extent the cumulative amount of all penalties will prompt S&P and Moody's to downgrade JNJ. In my opinion, even if JNJ were to be downgraded to AA, I do not envision a dramatic negative impact to its borrowing costs.

Next, we need to put this staggering hypothetical $40B in penalties in perspective.

In my opinion, JNJ’s stock price got ahead of itself in recent months. When it released Q3 results and provided guidance for the remainder of FY2018 on October 16, YTD diluted EPS was $4.49. If we estimate that Q4 results will be similar to diluted EPS results for the previous 3 quarters, we then arrive at ~$6/share diluted EPS.

With JNJ now trading at $133, the forward PE is ~22.17 (based on projected FY EPS of $6/share). This level still appears to be slightly elevated. 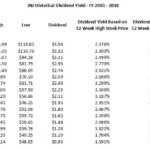 In every year subsequent to FY2006, there was a point in time when JNJ’s dividend yield was in excess of the current dividend yield; I fully recognize that during this timeframe we had a Financial Crisis but that was only in 2007 and 2008. Note that the dividend yield has often exceeded 3% when JNJ’s annual stock price was at its 52 week low.

Looking the dividend yield on the basis of the 52 week high and 52 week low in recent years, a retracement is JNJ’s stock price so as to produce a ~3.3% dividend yield is not out of the realm of possibility.

Using the current $3.54 dividend and a ~3.3% dividend yield projection, JNJ’s stock price would need to retrace to the ~$107 level. This might be a stretch.

Keep in mind that JNJ will most likely declare one more $0.90/quarter dividend; this will be at the beginning of January 2019 for payment in mid March 2019.

We then need to look at what JNJ’s new dividend will likely be in FY2019. Looking at JNJ’s dividend growth it is quite possible that JNJ will increase its dividend by 6.5% to ~$0.96/quarter (late April declaration for payment in mid June). 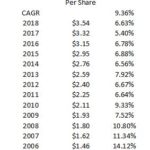 This would mean that in FY2019 there would be one dividend at $0.90 and 3 dividends at ~$0.96 for an annual dividend of $3.78. On the basis of this projected dividend for FY2019 and a ~3.3% dividend yield which would be somewhat similar to levels in recent years, JNJ’s stock price would need to retrace to ~$115. This level might not be totally out of the realm of possibility.

I do not dispute that JNJ is a great company but it certainly faces considerable headwinds. With the uncertainty as to the magnitude of JNJ’s ultimate penalties, I think JNJ’s stock price might be under some pressure for several years.

In addition to JNJ specific headwinds, we have several other events which will likely result in increasingly volatile market conditions. The lengthy list includes strained international relationships, Brexit, a deteriorating relationship between the US and just about every country in the world, a rising interest rate environment, etc., etc. and, let's not forget, a certain individual in the White House. I think it would be extremely naïve to expect this individual to not longer say or tweet anything during his remaining years as President that will result in a further deterioration in market conditions.

It might be tempting to acquire JNJ shares after this most recent significant pullback but I am of the opinion JNJ’s stock price is still too expensive; based on the information currently available I would be prepared to acquire additional shares below $115.

Unless JNJ retraces to this level over the next few weeks I will just patiently await the release of the Q4 and FY2018 results and FY2019 projections on January 22, 2019.

Disclosure: I am long JNJ.

By Charles Fournier|December 16th, 2018|Equity Investing|Comments Off on Johnson & Johnson – Is It Now Fairly Valued After 15% Pullback?