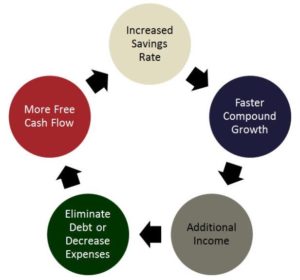 In this recent article I learned that more than 40% of Americans may be at risk of going broke in retirement. This statistic alarmed me so I did more digging in preparation for this post. What I uncovered is that according to the Fed:

In addition, just 54% of Americans invest in the market, either through individual stocks, mutual funds, pensions or retirement plans like a 401(k), according to Gallup. That is down 11% since the Great Recession.

Here are some more frightening statistics.

Canadian statistics might differ slightly but the general theme is the same. The problem is that many people have insufficient surplus free cash flow for investment purposes. They are, in essence, on a perpetual treadmill wherein outflows are incurred at a similar, or a greater level, than their inflows.

There are various reasons why some people do not, and possibly never will, have sufficient free cash flow with which to invest in equities. In some cases, people have neither the desire nor the aptitude to generate sufficient income.

There are, however, countless people who generate a decent income but their personal lifestyle prohibits them from accumulating any free cash flow for investment purposes.

Several years ago I read The Millionaire Next Door, The Surprising Secrets of America’s Wealthy by Thomas J. Stanley (Ph.D.) and William D. Danko (Ph.D.). The authors delve into why some people with moderate income can accumulate substantial wealth while others who generate substantial income fail to accumulate wealth of any significance. If you have not yet read it, here is a pdf copy you may wish to read.

Many who find themselves in a predicament where personal free cash flow is negative or negligible might use the excuse that they can easily improve their cash flow by merely working more. The problem with this train of thought is that, in many cases, people are trading time for money. Eventually we run out of time that can be traded for money. There are 168 hours in a week…no more, no less. Unless outflows are controlled, the personal cash flow issues will not be resolved on a long-term basis.

Figure Out Where You Currently Stand

Some people may need to resort to tackling the outflow side of the equation and not just the income side. Reviewing personal consumption patterns can uncover areas where, with some slight or radical changes, cash flow can be generated for investment purposes.

While it is all well and good to recommend debt elimination by cutting back on the number of lattes consumed, this may be insufficient to rectify a cash flow deficiency. Quite often more radical modification to the outflows is required.

As with any other journey, if you don’t know where you are it is impossible to know what route to take to get to your destination. This is why it is imperative that the historical outflows and projected outflows be analyzed.

I recognize a detailed review as I have proposed will be met with resistance by some people. Because of this, some people will likely never begin. As such, if someone is unprepared to go through this exercise but KNOWS major changes are required, it would be a good idea to at least start analyzing the following areas to determine if there are opportunities for improvement.

Choose where you live wisely. In many cases, this expense is the single largest monthly expense (next to taxes). You certainly want to live somewhere clean and safe but if this expense is a major strain on cash flow, it is quite possible a change in this area may be required.

Homeowners will tell you that a mortgage payment is just one of the many expenses incurred from home ownership. Start factoring in property taxes, utilities, and repairs and maintenance and you find your house can be a significant drain on your cash flow.

Should the results of a mortgage sensitivity analysis suggest there will be a cash flow deficiency, it is far better to determine this well in advance of the mortgage renewal. This way, there is time to plan versus the alternative which is to scramble at the last minute.

Tenants also need to take into consideration accommodation costs. In some major urban areas the cost of parking can be an additional expense. Should a tenant not own a vehicle at the time they move into a rental and they subsequently decide to purchase a vehicle, it is entirely possible they may incur an additional expense to acquire a parking spot if one is not included under the current rental agreement.

I recognize there is a host of non-monetary factors which come into play with respect to accommodation. As a result, this might be an expense category that can be analyzed after an exhaustive review of other expense categories has been conducted to identify opportunities for improvement.

Today I overheard a conversation between other members of the gym to which I belong about the cost of vehicle ownership. A couple in their mid 20s had fairly recently purchased a high end pick-up truck. Initially they were pleased since they had managed to take advantage of various incentives and they had negotiated lease payments they thought they could easily service. Within a few months of ownership, however, they realized they had made a serious mistake. What they found was that fuel and insurance expenses were far greater than they had imagined.

They are now attempting to unload the vehicle but have learned they are unlikely to recover the amount owing under the lease. As a result, if they break the lease, they will end up with a balance owing and no truck!

I have this as a separate category because I don’t think some people truly realize just how much they spend a year on coffee!

Prior to retirement I worked at a major Canadian financial institution in downtown Toronto. There were at least 5 Starbucks outlets within a few blocks from the office tower in which I worked. I can assure you that people were not just buying one coffee a day and they were not buying ~$2 coffee. In many cases people were spending over $3/coffee and they were consuming at least 1 coffee in the morning and at least 1 in the afternoon.

Let’s go with a conservative $6/day on coffee and use ~225 work days/year. That is ~$1,350/year in after tax dollars being spent on something that does not stay in your system very long!

If you are inclined to disagree with my figures, use your own estimates. You will still come up with a dollar value that could very well be deployed more appropriately.

I strongly suspect a significant percentage of the work force does not brown bag it to work. Everybody’s consumption pattern differs so it is highly advisable to track expenditures in this category for 1 month.

When I was working I undertook this review and was surprised how much I was spending on lunch. I came up with a monthly figure of ~$110 and my lunches were only ~$5 ($5 x 22 business days/month)!

My wife was recently speaking with a woman who indicated that she and her significant other never cook meals at home; they are both in their mid 50s. Seven days a week, three times a day, this couple eats out; this same couple also volunteered that they have nothing saved for retirement. While this couple is an extreme case, it is amazing how much money can be wasted in this category.

There is a wide array of forms of entertainment and price points. I will not, therefore, delve into the minutia in this area. Suffice it to say, some people spend a substantial portion of their after tax income on entertainment. A starting point for analysis purposes could be the number of times/month one goes to bars.

Another area worth investigating is the amount spent monthly on cell phones, internet, television, and various other forms of home entertainment.

On the liquor front, let’s assume someone consumes a case of beer every two weeks. If the average cost of a 2-4 is $38 that works out to be another $988 ($38 x 26 weeks/year) spent on something that offers no health benefit.

Lottery tickets is another huge expense for some people. When I don’t pay for gas at the pump I will go into the kiosk at the gas station. In more cases than not, there is someone at the cash register who is paying for gas, purchasing cigarettes, and is dropping $20+ on lottery tickets. I strongly suspect the vast majority of that person’s winnings do not cover the cost of the lottery tickets.

With the impending legalization of marijuana in Canada, I envision the recreational use of marijuana will grow in popularity. I do not yet know what will be the regulated pricing structure but I do know it is another unnecessary expense some people will incur on a recurring basis.

Based on personal observation over time I know that some people spend thousands of dollars a year on clothing. In many cases, these chronic shoppers already have a significant wardrobe consisting of clothes in perfectly good condition.

I must profess that I abhor shopping for clothes so I truly have no idea what would be a reasonable clothing budget for different size families. I strongly suspect, however, that if some people were to tabulate how much they spend on clothing on an annual basis it might be a rude awakening.

The issue with hobbies is that they typically cost money and in some cases, a lot of money. I strongly suggest people look closely at all hobby related expenses. I am not advocating that people completely eliminate all hobbies but am merely suggesting that exercising some expense control in this area might be able to alleviate some financial strain.

According to an Ipsos poll conducted in December 2017, the average Canadian owes $8,500 in consumer debt, excluding their mortgage. If you look at the statistics more closely, however, there are some Canadians in a whole heap of trouble on the consumer debt front.

While some of this debt will be at interest rates in the 20 – 30% range I will be extremely generous and will use a 12% average interest rate for analysis purposes. $15,550 @ 12% works out to be $1,850 in annual interest payments ($155/month) which are, once again, being serviced with after tax dollars.

There you have it. Without much effort I was able to come up with areas of opportunity in which expenditure cut backs could generate free cash flow for investment purposes.

If someone’s cash flow situation is in dire need of improvement, looking at incidental expenses might uncover expense control opportunities. The issue with this is that sometimes cutting back on these incidental expenses just won’t cut it. In this case, more radical action will be required.

The elimination, or significant reduction, of major expenses (eg. accommodation and vehicles) might be required. This certainly may not be easy nor will it be without some emotional discomfort. If, however, cash flow issues are affecting your personal life and/or health, it is very likely radical changes might be required fairly quickly.