Johnson & Johnson (JNJ) released Q2 2019 results on July 16, 2019. Although there is significant overhang from the 'talc' and 'opioid' legal issues I anticipate that any penalties JNJ does incur will be far less than those sought by the plaintiffs.

I view JNJ as being reasonably valued and would acquire additional shares if I did not already have what I deem to be a 'full' position.

In this article I touch upon JNJ’s ‘talc’ and ‘opioid’ legal issues and look at JNJ’s current valuation based on guidance provided on its July 16th Q2 earnings call with analysts.

In my previous JNJ article I touched upon the ‘talc’ litigation given that Reuters published a story on December 14th in which it stated that JNJ knew for decades that cancer-causing asbestos lurked in its Baby Powder (click here for Reuters' Lisa Girion’s interview with CNBC in which she discusses her JNJ story). In that article I included sections entitled ‘Lawsuits Are Nothing New to JNJ’ and ‘Every Crisis Will Go Through 4 Stages’.

Although JNJ being embroiled in legal issues makes for interesting business news I think investors need to take a step back. Looking at JNJ’s 10-K reports for the past 20 years I see that JNJ has been embroiled in multiple legal proceedings EVERY year.

Many of these legal proceedings last for years and in cases where JNJ has been found liable, the ultimate settlement has typically been for an amount that is far less than originally sought by the plaintiffs or far less than the initial award. In fact, on the July 16th analyst call, management reiterated that even when a verdict initially goes against JNJ, the company often prevails on appeal.

While JNJ faces more than 14,000 lawsuits over its talc-based baby powder, as well as subpoenas from the Justice Department and the Securities and Exchange Commission, the company has indicated that for decades it has been validated by highly respected agencies that JNJ’s ‘talc’ product is safe. It would appear JNJ has a high degree of confidence that it will prevail in the ‘talc’ litigation since it only recorded a $0.19B charge in Q2 for defending itself in talc litigation and has not set aside money for possible settlements or liability payments.

In addition to the highly publicized ‘talc’ litigation, JNJ is also embroiled in ongoing ‘opioid’ litigation (page 39 of 65 in JNJ’s Q1 10-Q).

The state of Oklahoma has accused JNJ of acting as the “kingpin” of the opioid crisis because it sold painkillers, as well as grew and imported raw materials that other opioid manufacturers used. The state alleges JNJ fueled the state’s opioid crisis by using misleading and deceptive marketing beginning in the 1990s to push doctors to prescribe more opioids.

The Oklahoma case is the first to reach trial from around 2,000 lawsuits filed by state and local governments seeking to hold pharmaceutical companies responsible for a drug epidemic the U.S. Centers for Disease Control and Prevention says led to a record 47,600 opioid-related overdose deaths in 2017.

This non-jury trial has come about after Oklahoma resolved claims against OxyContin maker Purdue Pharma LP in March for $0.27B and against Teva Pharmaceutical Industries Ltd for $0.085B.; JNJ is the only remaining defendant.

Oklahoma’s state attorney argues that JNJ, which sold the painkillers Duragesic and Nucynta, marketed the opioids as “safe and effective for everyday pain” while downplaying their addictive qualities, helping create a drug oversupply. Not only was JNJ motivated to boost prescriptions because it sold opioid painkillers, but because it also grew and imported raw materials opioid manufacturers like Purdue used.

JNJ’s legal team has countered that JNJ’s products made up a small share of opioids prescribed in Oklahoma and carried U.S. Food and Drug Administration-approved labels that warned of the addictive risks. He has also argued that Oklahoma is seeking to ‘stretch’ the bounds of a public nuisance statute in order to force JNJ to pay up to $17.5B to help the state address the epidemic for the next 30 years. In addition, JNJ has stated that Oklahoma's own Medicaid reimbursement records show that for the last 20 years, less than 1% of the reimbursement occurred for JNJ products.

The case in Oklahoma is being closely watched by plaintiffs in other opioid lawsuits, particularly the 1,850 cases consolidated before a federal judge in Ohio, where there has been a push for a settlement ahead of an October trial.

In fact, some plaintiffs’ lawyers have compared the ‘opioid’ cases to litigation by states against the tobacco industry that led to a $246B settlement in 1998.

It is readily apparent that defending itself from multiple lawsuits is a normal course of JNJ’s business; annual legal related expenses are typically in excess of a billion dollars. Look at ‘Note 11 – Legal Proceedings’ in JNJ’s Q1 2019 10-Q which commences on page 30 of 65 and you find multiple cases which fall under the following categories:

JNJ has specifically stated in its Q1 10-Q that a judgement against it in any of the suits could result in ‘large monetary penalties and significant damages’. It does not, however, expect the legal proceedings to have a material adverse effect on its financial position, although operations and cash flows in certain quarters could see a negative impact.

While JNJ could end up having to pay billions in fines, we see that JNJ:

In essence, the lawsuits have not yet reached the level of jeopardizing JNJ’s strong financial footing. In fact, if JNJ were to incur a staggering $40B in fines (this is a randomly chosen level) I suspect the major credit ratings agencies would downgrade JNJ’s AAA credit rating but this would not be the end of JNJ.

Material related to JNJ’s Q2 and YTD results as well as guidance for the remainder of the current fiscal year can be accessed here.

Revenue and EPS were in line with management’s expectations but as expected, there was a sales deceleration from Q1 primarily due to the impact of generic and biosimilar competition in JNJ’s Pharmaceutical business.

In JNJ’s Pharmaceutical business, performance was driven by volume of transformational medicines that address high unmet medical need rather than price increases.

In the Consumer segment, growth accelerated in the NEUTROGENA and AVEENO beauty lines. The newly acquired DR. CI:LABO and ZARBEE's businesses also contributed to this accelerated growth with growth more than offsetting the one-time impacts related to seasonality and inventory levels management referenced on the Q1 earnings call.

The Medical Devices segment experienced some isolated supply disruptions but management has indicated this segment is on track toward the goal of exceeding FY2018’s performance.

On the earnings front, EPS was favorably impacted by a ~$2B pretax gain related to the sale of the Advanced Sterilization Products business which closed early April; this gain comprises a large majority of JNJ’s other income guidance for FY2019.

Guidance is provided solely on a non-GAAP basis because JNJ is unable to predict with reasonable certainty the ultimate outcome of legal proceedings, unusual gains and losses, acquisition-related expenses and purchase accounting fair value adjustments without unreasonable effort. These items are uncertain, depend on various factors, and could be material to JNJ’s results computed in accordance with GAAP. 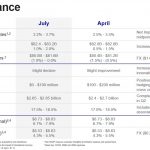 As noted earlier, JNJ is one of only two companies rated AAA by Moody’s and S&P Global. Neither agency has JNJ’s rating under review.

With JNJ having increased its quarterly dividend from $0.90 to $0.95 starting with the recently distributed June 11th dividend and shares trading at ~$132, the dividend yield is ~2.87%.

In my previous JNJ article I wrote that when JNJ released Q3 2018 results and provided guidance for the remainder of FY2018 on October 16, YTD diluted EPS was $4.49. I estimated that Q4 results would be similar to diluted EPS results for the previous 3 quarters thus resulting in ~$6/share diluted EPS (actual EPS for FY2018 ended up coming in at $5.61).

I view the forward valuation based on GAAP and non-GAAP estimates as being attractive.

I do not disagree that it is premature to make any reliable estimate on the value of the talc and opioid penalties JNJ will ultimately incur. Despite its success in defending itself in previous legal matters, I am of the opinion JNJ could be in for a very rough ride.

I think JNJ faces potential damage to its reputation and some past decisions could very well come back to haunt JNJ for several years. Being known as a provider of pharmaceuticals and medical solutions that cannot be trusted is not good for a medical company.

Having said this, I think investors need to put in perspective that even if JNJ were to incur an astronomical $40B in penalties, this would not be the death knell of JNJ. I suspect JNJ’s AAA credit rating would be downgraded if it were to incur a penalty of this magnitude but we need to keep in mind that JNJ typically generates $15B in Free Cash Flow on an annual basis.

I think JNJ is reasonably valued. Were I not satisfied with my existing JNJ exposure I would make an additional lump sum purchase at the ~$132 level. For now, however, I will pass on acquiring additional JNJ shares.

Disclosure: I am long JNJ.

By Charles|July 17th, 2019|Equity Investing|Comments Off on Johnson & Johnson – The Potential ‘Talc’ and ‘Opioid’ Liabilities Are Real But Overblown