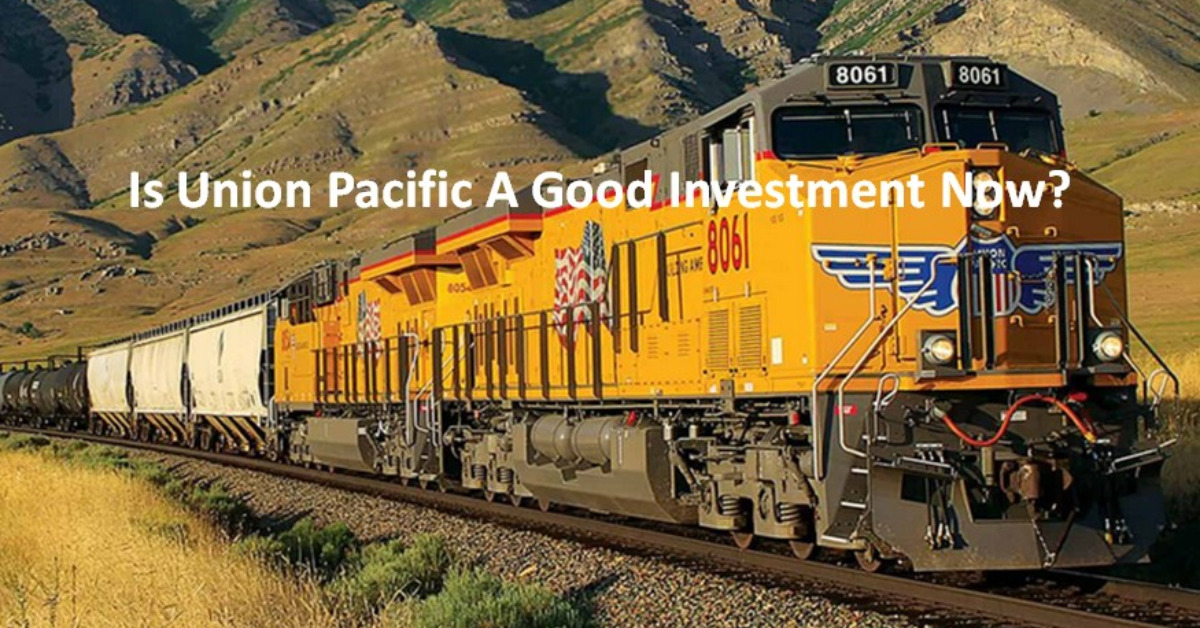 While on a ski trip in Western Canada in early March 2020, I had the good fortune of a 3 hour time zone difference between New York City and Central British Columbia.

On March 9th, I awoke to several new centimetres of snow that had fallen overnight. Just looking at all that fresh powder got me excited. I became more excited when I learned that equity prices were tanking.

The ski lifts did not start operation until ~8:45 AM PT (11:45 AM ET in New York City). It was only 7 AM PT. I had just under 2 hours in which to place trades before heading out for a day of skiing!

Having made a mental list of companies in which I wanted to acquire additional shares and/or initiate new positions, I was ready to go 'shopping'. Union Pacific (UNP) was on this list and I acquired 200 shares at ~$142 for one of the 'Side' accounts within the FFJ Portfolio. In hindsight, I did not acquire enough shares.

I have mentioned in previous posts that the vast majority of my investment errors have been errors of omission as opposed to errors of commission. I have a long list of instances where I did not acquire shares (or too few shares) in high-quality companies when my analysis flashed 'BUY' 'BUY' BUY'.

Fast forward to the present and UNP is trading at ~$246. Merely looking at the $104/share increase in the stock price ($246 - $142) is meaningless. What I need to look at is UNP's valuation to determine if shares are, at the very least, reasonably valued.

In this post, I look at whether UNP is a good investment now.

Union Pacific Railroad is the principal operating company of UNP. It is the largest publicly listed railroad in North America with ~30 employees, over 32,000 route miles, 7,600 locomotives, and ~53,000 freight cars (owned/leased).

UNP has ~10,000 customers and it connects by rail 23 states in the western two-thirds of the US. From 2011 - 2020, UNP invested ~$35B in its network and operations to support America's transportation infrastructure. The diversified business mix includes the following business groups:

It serves many of the fastest-growing U.S. population centers, operates from all major West Coast and Gulf Coast ports to eastern gateways, connects with Canada's rail systems and is the only railroad serving all six major Mexico gateways.

UNP provides value to its roughly 10,000 customers by delivering products in a safe, reliable, fuel-efficient and environmentally responsible manner. 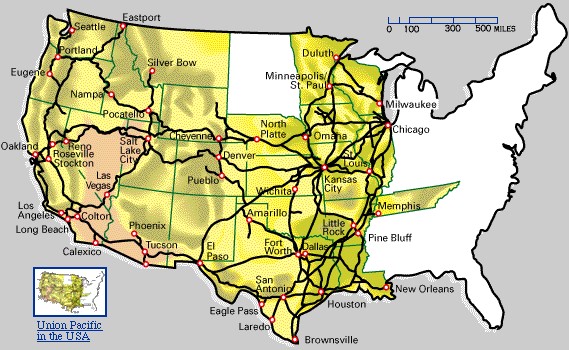 I encourage investors unfamiliar with UNP to read Part 1 of the FY2020 10-K to get a good overview of the company.

The efficient shipment of goods via rail is critical and any improvement in the US economy should translate into higher freight volumes.

On January 19, 2021, UNP and Schneider announced the signing of a long-term agreement in which UNP will be Schneider's primary intermodal rail provider in the western U.S. effective January 2023. Schneider will remain with BNSF Railway (BNSF) until the December 31, 2022 expiry of its contract.

This decision means Knight-Swift Transportation will shift a portion of its 150,000 to 200,000 annual intermodal loads to UNP.

Knight-Swift Transportation's decision to end its relationship with BNSF is unrelated to service problems since last autumn in Los Angeles and Chicago but rather is based on the strength of UNP’s intermodal network in key US markets.

In addition, APL Logistics (a member of the KWE Group) recently announced it is shifting its domestic intermodal business from BNSF to Union Pacific.

Where railroads previously focused on moving trains, PSR shifts that focus to moving cars. Instead of waiting for a long train to be built, trains are always moving and cars are picked up on schedule, regardless of train length. Velocity and train length remain important, but now, the focus on moving cars takes precedence.

The objective of using PSR is to improve a railroad's operational ratios (OR); OR is operating expenses divided by revenue. A lower number is better and a lower OR means the railroad is generating a higher earnings margin.

The key performance metrics PSR practitioners use to measure operational improvements, such as train length, freight car velocity, car "dwell," and operating car inventory can be found here for UNP.

The Pacific Maritime Association represents 70 ocean carriers and terminals operating at 29 West Coast ports. It proposed extending its current agreement with the International Longshore and Warehouse Union for another year through July 1, 2023. In late 2021, this union, which represents ~15,000 dockworkers at the US's largest ports, declined an offer by employers to extend existing labour contracts for a year.

When companies and workers last discussed contracts in 2014, West Coast ports faced 9 months of slowdowns. These slowdowns only came to an end with involvement from the White House.

The existing contracts were originally set to end in 2019. A 3-year extension, however, was negotiated after roughly two-thirds of union members voted in favour of an extension to avoid cargo disruptions in exchange for higher wages and pensions.

This time around, the negotiations come amid record backlogs at the ports of Los Angeles and Long Beach, with persistent supply chain constraints contributing to delays, shortages of some goods and higher inflation.

Looking at UNP's system map above, we see that UNP services West Coast ports. One has to wonder about the impact on UNP if there is a strike.

A summary of UNP's Q4 and FY2022 results is accessible here and the accompanying Earnings Presentation is found here. 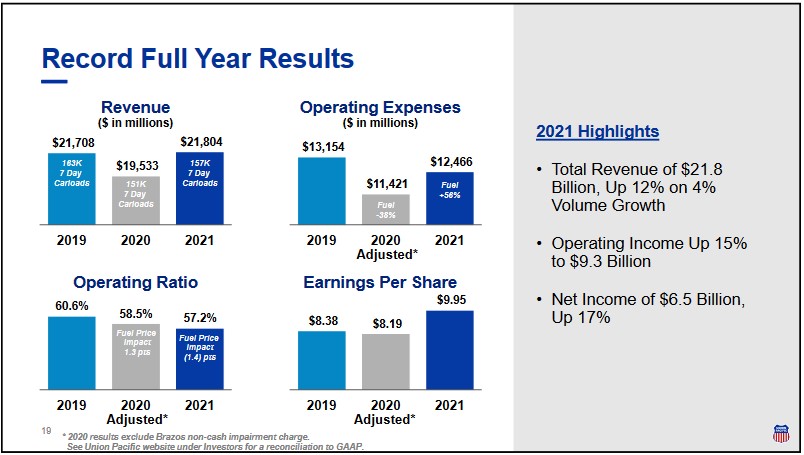 UNP's priority for cash deployment is its capital investment. In FY2021, this amounted to just over $3B or ~14% of revenue. 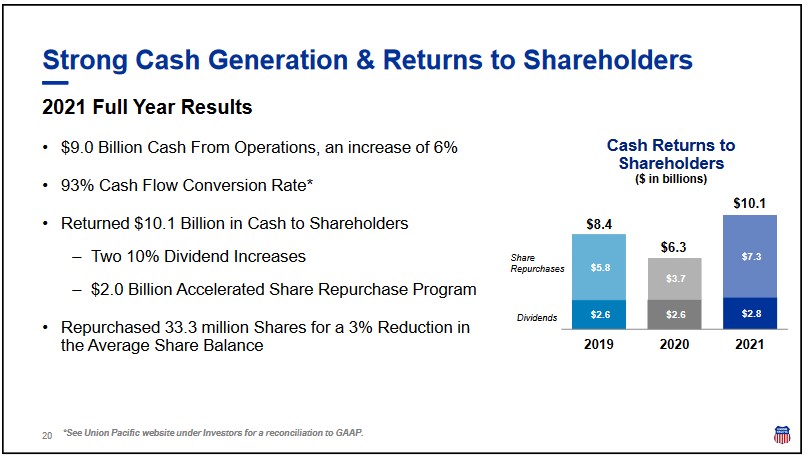 At UNP's May Investor Day, UNP laid out its three-year targets. These targets remain intact.

On the volume front, UNP stated it would outpace Industrial production through strong business development efforts. New business wins such as those reflected earlier in this post and an anticipated recovery of autos and international rail traffic bode well.

UNP also expects to have the added benefit of coal volume growth; UNP had originally anticipated coal to be a headwind over the next 3 years. With current natural gas prices and recent business wins, however, the coal business should provide a tailwind in FY2022.

Volumes should be led by Bulk and Industrial in the first half of the year and stronger Premium volumes in the second half IF supply chains and chip shortages improve.

The combination of growing volumes, pricing above inflation, and strong incremental margins should lead to the achievement of UNP's long-term goal of a 55% operating ratio.

UNP plans to invest ~$3.3B of capital in FY2022 which is well within long-term guidance of less than 15% of revenue. The increase in capital spending is driven by:

Management anticipates strong top-line growth, increasing profitability, and ongoing capital discipline to translate into a ~100% cash conversion rate. Management expects this strong cash generation to allow it to continue to reward shareholders with an industry-leading dividend payout and strong share repurchases in line with 2021 levels.

Moody's rating is the top tier of the lower medium-grade investment-grade category. This rating is one notch lower than those assigned by S&P Global and Fitch.

S&P Global's and Fitch's ratings are the bottom tier in the upper-medium-grade investment-grade category.

S&P Global and Fitch define UNP as having a strong capacity to meet its financial commitments. However, it is somewhat more susceptible to the adverse effects of changes in circumstances and economic conditions than obligors in higher-rated categories.

In FY2021, UNP rewarded shareholders with two 10% increases and distributed a total of $2.8B to shareholders. I do not anticipate similar increases in FY2022. If the quarterly dividend remains stable at $1.18/share throughout FY2022, then the annual $4.72 dividend yields ~1.9% based on the current ~$246 share price.

Effective April 1, 2019, UNP's Board authorized the repurchase of up to 150 million shares of common stock by March 31, 2022, replacing the previous repurchase program. These repurchases may be made on the open market or through other transactions.

The following are the quarterly share repurchases in FY2021:

In total, UNP repurchased a total of 33 million common shares at an all-in cost of ~$7.3B.

As of September 30, 2021, UNP has repurchased a total of $46.8B of common stock since the commencement of the repurchase programs in 2007.

NOTE: UNP has established accelerated share repurchase programs (ASRs) with financial institutions to repurchase common shares. These ASRs have been structured so that at the time of commencement, UNP pays a specified amount to the financial institutions and receives an initial delivery of shares. Additional shares may be received at the time of settlement with the final number of shares to be received based on the volume-weighted average price of UNP's common stock during the ASR term, less a discount and subject to potential adjustments under the terms of such ASR.

The following are the forward adjusted diluted PE levels using guidance from the two online trading platforms I use.

Only 5 brokers have provided FY2024 estimates so I disregard this guidance.

A forward adjusted diluted PE multiple of ~20 is at the top end of what I think is reasonable. I would consider adding to my position if UNP's share price were to retrace to roughly the mid $220 range.

Rather than distribute a dividend, I would prefer that UNP redirect the money distributed in the form of dividends toward the repurchase and cancellation of shares. I shudder to think what would be UNP's current share price if the $20.64B in dividend distributions over the 2012 - 2021 timeframe had been used to repurchase shares!

My preference for share repurchases versus dividend distributions is that if UNP investors hold shares for the very long term, any tax liability attributed to the increase in value of UNP's shares is postponed well into the future.

My desire, however, is unlikely to happen since investors have come to expect a dividend distribution from UNP. Any decision to amend the dividend policy would very likely lead to investor backlash and possibly a short-term plunge in UNP's share price.

Despite my preference for capital gains, I am not about to let this deter me from acquiring additional UNP shares.

My immediate concern is that North American railroads, in general, are trading above the high end of the group’s historical trading range; I have exposure to UNP, Canadian Pacific, and Canadian National. The elevated multiples in recent years are likely attributed to the low-interest-rate environment and improving industry returns on capital.

In addition, I think the prospect of supply-chain improvements on the U.S. west coast will take longer than expected to return to 'normal'.

A strike by the International Longshore and Warehouse Union would negatively impact UNP's results. I suspect the White House's involvement would once again occur, however, because current logistics conditions are already straining the US economy.

UNP is not high-growth such as some of the companies in which I have recently acquired shares (Danaher, Intuitive Surgical, Stryker, and Copart). I am, therefore, going to patiently wait for UNP's share price to pull back. A price at/below the mid $220s is the level at which I would consider adding to my exposure.

I wish you much success on your journey to financial freedom!

Disclaimer: I do not know your circumstances and do not provide individualized advice or recommendations. I encourage you to make investment decisions by conducting your own research and due diligence. Consult your financial advisor about your specific situation.

I wrote this article myself and it expresses my own opinions. I do not receive compensation for it and have no business relationship with any company mentioned in this article.

By Charles Fournier|January 23rd, 2022|Equity Investing|Comments Off on Is Union Pacific A Good Investment Now?